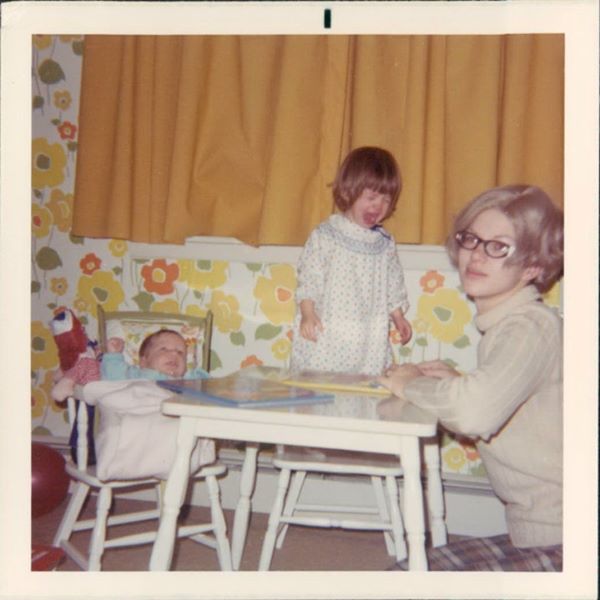 The photograph headlining this post probably encapsulates perfectly what it must have been like to mother me all these years, at least 75% of the time. Maybe 95%. Mom would probably say, “No, only maybe 25%” while really wanting to say “50%” but deeply wishing to say “75%.” And it would depend on how many mimosas we’d had when I asked. But she would likely put the matter to rest by telling me that I’m wonderful, so percentages don’t really matter, right? But just look at her expression. It is everything.

(Let it be known right now: she still mothers me exactly the same way I’m about to relate to you.)

I was probably in high school. Maybe 14? 15? I recall that I was wearing this navy-blue flannel nightgown with flowers on it. And I was standing in the middle of my bedroom just screaming my fucking head off. I have absolutely no idea why. Just screaming. I probably looked like a bigger version of the screaming child standing on a chair that I am in that picture above. And whatever it was inside my mother that put that look on her face in that photo had had enough of my shit after all those years and she took three steps into the room and just hauled off and slapped me right across the face.

I have no idea what happened next as far as she’s concerned, but that slap knocked the teenage narcissist right the fuck out of my head (kinda, temporarily anyway). I don’t recall if she said anything. I do recall that she backed away and closed my door and it was pretty much understood that I was not to come out until I was a decent human being who would cease giving her any more fucking absurd and selfish trouble. But I certainly stopped screaming. Maybe. I might have just started crying very loudly about the inhumanity of it all. Dramatically thrown myself onto my bed, sobbing. Who knows. Teenagers can be such awful people. I was not a good one, except in my own head, where it mattered at the time.

This other time. I was a freshman in high school, and it’s certainly possible (very likely) that this happened shortly before the story above, and my screaming may have been a response to how very long I’d been grounded after this incident. I went for a sleepover at my friend Marisa’s house. Marisa was my BFF from our old neighborhood. And I went over for a sleepover, and Marisa’s parents went out for the night and left Marisa’s grandmother in charge, and after her grandmother wrapped our hair up in strips of paper towel so that we’d wake up with curls, she went to bed, and we demolished the liquor cabinet.

I could digress into an entire essay about the role that Marisa and her family played in my life, but those are words for a different day. But suffice it to say that they had this set of aluminum, perhaps? I don’t know. Very late-70s, colorful, metal cups, and we filled them with ice and then a splash from each of the decorative crystal booze decanters that sat, dust-free, on this table beneath the windows in their sunken family room, with some orange juice, and we did that several times, and listened to records in the basement, in our paper-towel-strip-curler hair, and we got completely fucking wasted. And I can still taste aluminum in my mouth every time I taste anything remotely close to bourbon mixed with citrus.

Right before I vomited all over their very-new, very-white, very-plush white carpeting in the small hall that led off to the bedrooms and bathroom, I’d been trying to determine if Marisa, curled up, naked, around the pink? I think? toilet, on the tank of which sat a Barbie doll with a crocheted dress that covered up the spare roll of toilet paper was still alive.

The next thing I remember was a lot of yelling. And then the next morning, when my mother came to pick me up, and I tried to bolt out Marisa’s front door like I was gonna get away with something and Marie, Marisa’s mother, was right behind me with a “Not so fast, girlie” in her wonderful, warm, Philly accent. And I sat in the front seat of my car and watched as Marie told my mom what had happened, while Marisa stood on the front stoop and we just stared at each other like “We are so fucked” only we didn’t say things like that then. It was just “My head hurts and we are in trouble.”

And when Mom got back in the car, she said “You are going to be the one to tell your father about what you’ve done.”

I don’t remember if she told him or I told him. I could be conflating that experience of sitting on the couch in my father’s study, the couch we really only ever sat on if we were in a fuck-ton of trouble, with another time that I couldn’t look my father in the eye and admit what I had done, which I will get to in a second, but I was grounded until the end of the school year from that weekend, which was right after spring break. And got another week tacked on for speaking disrespectfully to my mother at dinner.

(I mean, I still snuck out. I took “bike rides” that ended a block and a half away at my best friend’s house, where we smoked cigarettes and pot until my mom would call Susan’s mother and say “If Viki happens to ‘ride by’ tell her to come home for dinner.”)

But I know when I sat there on that couch, when he’d gotten home from work and had slammed his keys and wallet down into the drawer of his desk (the desk that sits in my office in my house now, the desk I cannot sit at for very long, the desk I will never be able to get rid of, the desk I’m considering having them bury me in) after a long day at work, that she stood in the doorway and glared at me and waited for me to own up to what I’d done. And I know exactly what kind of pressure she was allowing to build, and exactly what that pressure was also doing to her. I know it now in a way I did not know then. An inkling, maybe. But I didn’t know. I know now. (Jesus, Mom. Thank you.)

A few years after that, I got in the kind of trouble that every mother fears. And I waited as long as I could, until right before my 18th birthday, to tell my mother what my trouble was. I’m gonna leave out the specifics for now. Whatever it is you’re guessing is probably right.

She was in her bedroom and I went in and said I needed to tell her something, and we sat on the bed, and I told her, and she was very calm. And she waited a minute or so before she said “I knew this was going to happen.”

I knew, she said, when I’d taken you to buy you pink ballet slippers and you wanted to bring them over to Marisa’s house and I let you do it because you promised you were just going to show them off.

And then I came home, wearing them, covered in mud (brand-new! We had no money! Brand new!) and I had taken one look at her “I AM GOING TO KILL YOU” face and said “Tricia made me do it.” Being, Tricia, the girl who lived behind Marisa, had somehow forced me to stomp around in the muddy low spot between their backyards in my brand-new pink ballet slippers that my mom had probably decided that a week or so of tuna casserole were worth buying for me even though I’d never be capable of or care enough to, ballet in a way beyond twirling either before or after everyone else.

And. Again. “You are going to have to tell your father.”

(She didn’t, though. She waited. And waited. And I couldn’t do it. I couldn’t say it. And the pressure built and Dad got past the point of being able to bear what he was about to hear, and she said it for me. And then turned and walked away.)

And that was it.

(I am leaving out that I know, now, certainly, what she dealt with from my father during this time. I was in my own world. I know that she stood in front of me then, instead of behind me. I know that no matter how I experienced that time, that she bore the brunt of it.)

Behind every moment–behind every mistake, behind every success–she was right there, waiting to celebrate me, or waiting to listen to me and console me but not ever once really letting me off the hook for my fuck-ups.

If I’ve done anything right as a mother, it was to let my children be their own people, and they are really awesome fucking people, even though sometimes they haven’t been. Because HUMAN BEING. And it is because my mother let me be my own person, in all the horrible, awesome humanity that entails.

We got another puppy instead.

It would be a mistake for me to leave out all of the other examples she set for me, for us, my brothers and me. When she’d had enough and said “I’m going to do this now, fuck all y’all” (not in those words exactly, but certainly…) and went back to school to get another bachelor’s degree in music and to start teaching and to accept? demand?  my father adding an addition onto the house to house her Steinway in the music room and her two pianos and office below it so she could teach piano.

It would be an insult to her to not acknowledge that she put her fucking foot DOWN and said, finally, “You want me to do this, mother you, wife you, deal with you fucking people, you’re gonna have to step the fuck up!”

I hope we did. I’m not sure we have enough, yet. But damn, we know she loves us all, even when we are terrible people.

There is absolutely no possible way for me to thank my mother for being my mother. Good Christ, what a happy accident, what a fucking blessing. What a fucking legacy.