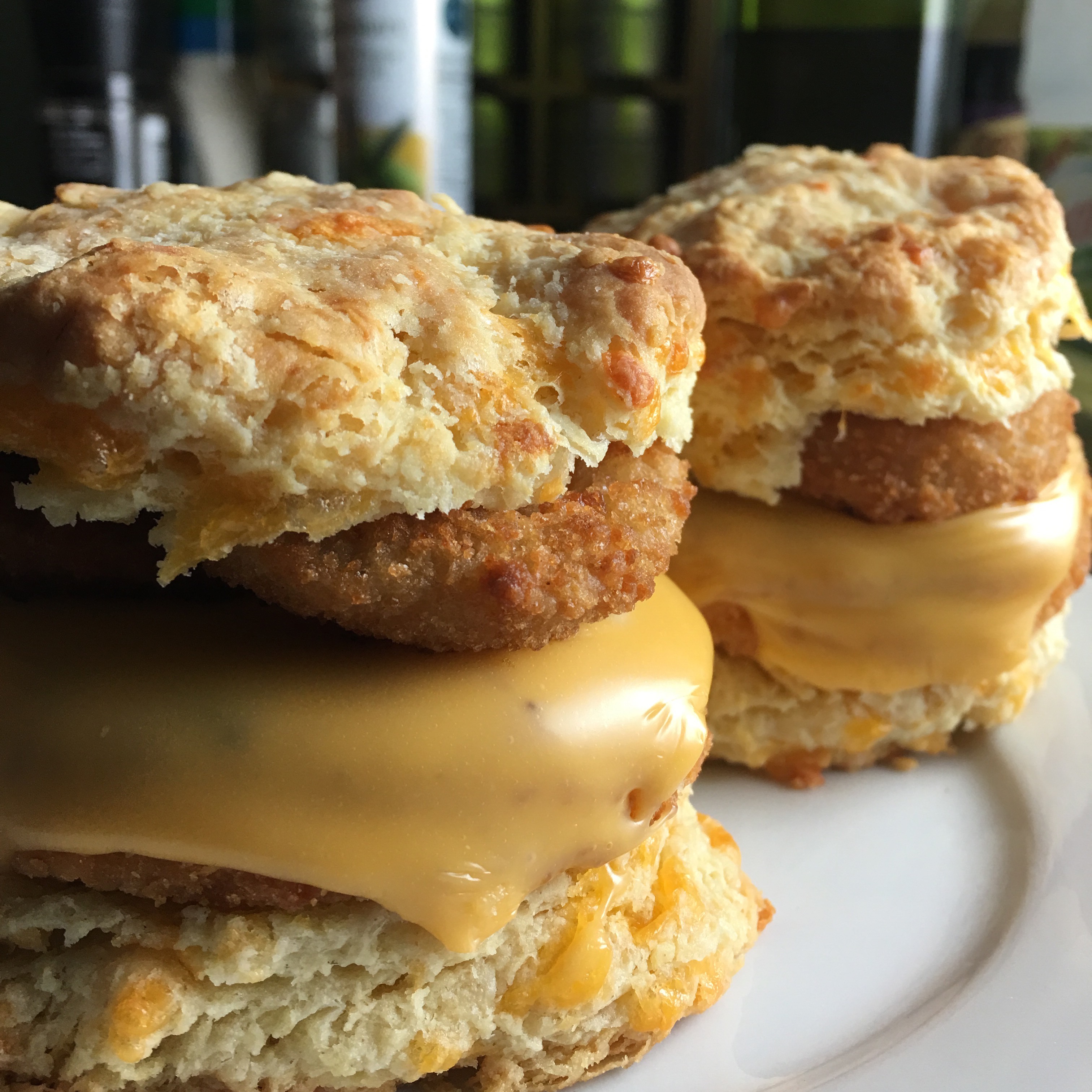 I have pretty much nothing in my pantry and fridge/freezer right now aside from flour, butter, frozen chopped/formed chicken patties (I DON’T KNOW WHY! IT’S A THING) and some frozen onion rings. I just haven’t really had time to go to the store.

What this means is that for dinner, I’m making Tennessee gas station chicken biscuits. Next time you’re headed through Tennessee, stop at a gas station. If they have some ladies behind the counter there whipping up fresh biscuits and making chicken biscuits with chopped/formed patties and wrapping them up in foil and selling them for a buck or two, get one. No. Get several. Get them again the next day. Eat them in the car.

If you know me, you know my thing with biscuits. I’ve kinda settled into a groove with the biscuits. I can usually whip them up and they’ll turn out lovely without referring to a recipe. Actually, I just never refer to a recipe, and most of the time they turn out delicious.

The key to good biscuits, as any food-lovin’ blogger will tell you, is that everything should be cold. In my case, I keep a lot of European butter in the freezer. And when I’m ready to make biscuits, I grate the butter with my cheese grater. I’ve tried everything. I don’t recall where I first read to do that. It’s brilliant. I’ve tried the food processor. I’ve tried cutting the butter into little pieces and cutting it into the flour with two knives. Cheese grater works the best. 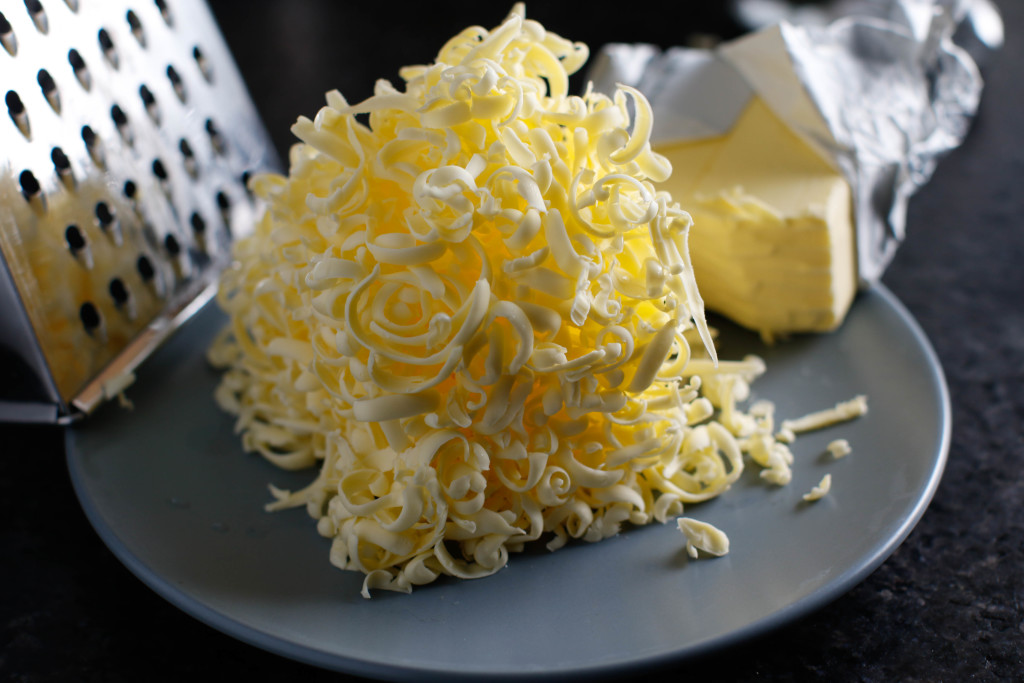 After you’ve grated it, stick the pile of grated butter back in the freezer for a few minutes while you mix up your flour, salt, baking powder and baking soda. You don’t want it getting melty. 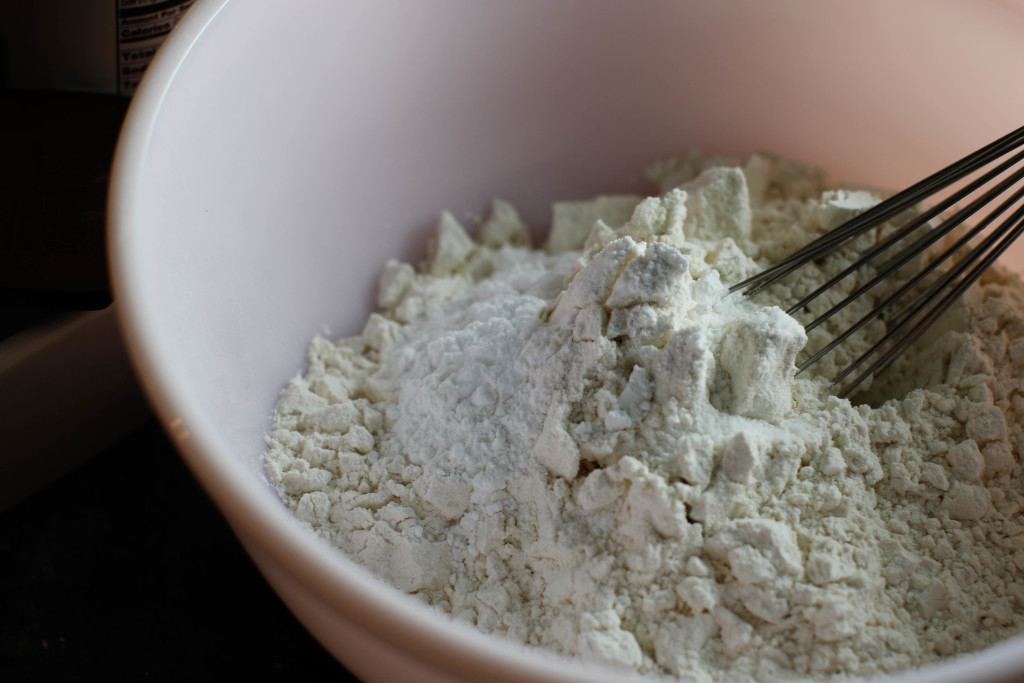 I’m basically cleaning out the fridge with these biscuits, so I threw some grated cheddar cheese in there because I had some. And because cheese makes everything better. 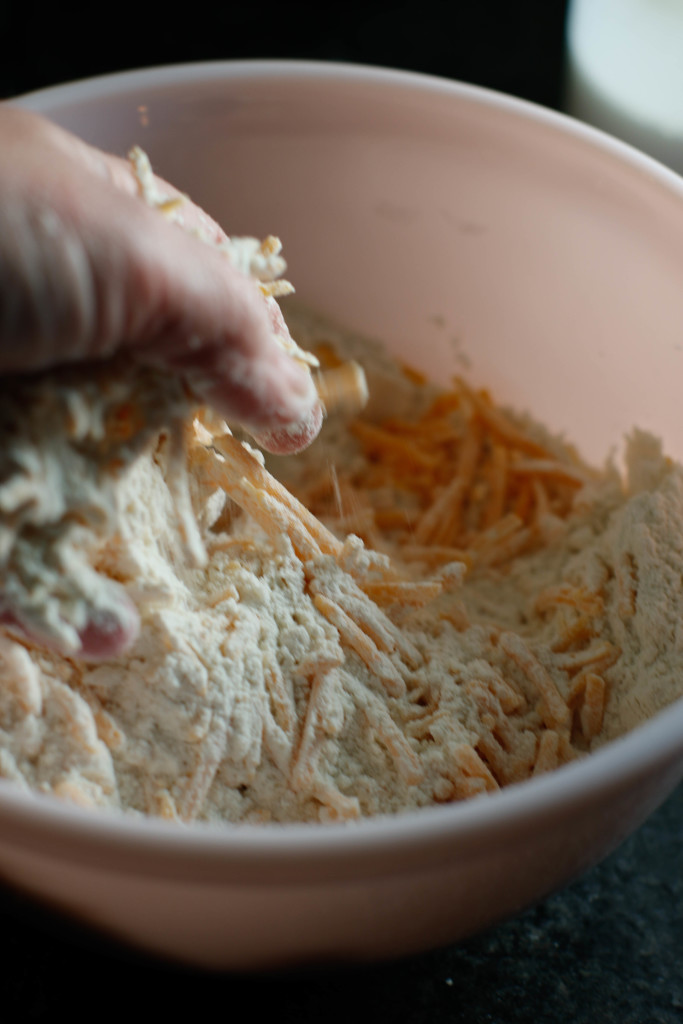 Get your grated butter out of the freezer and dump it into your bowl full of flour and cheese. Use a fork to toss everything together. You don’t want to touch it with your hot little hands! 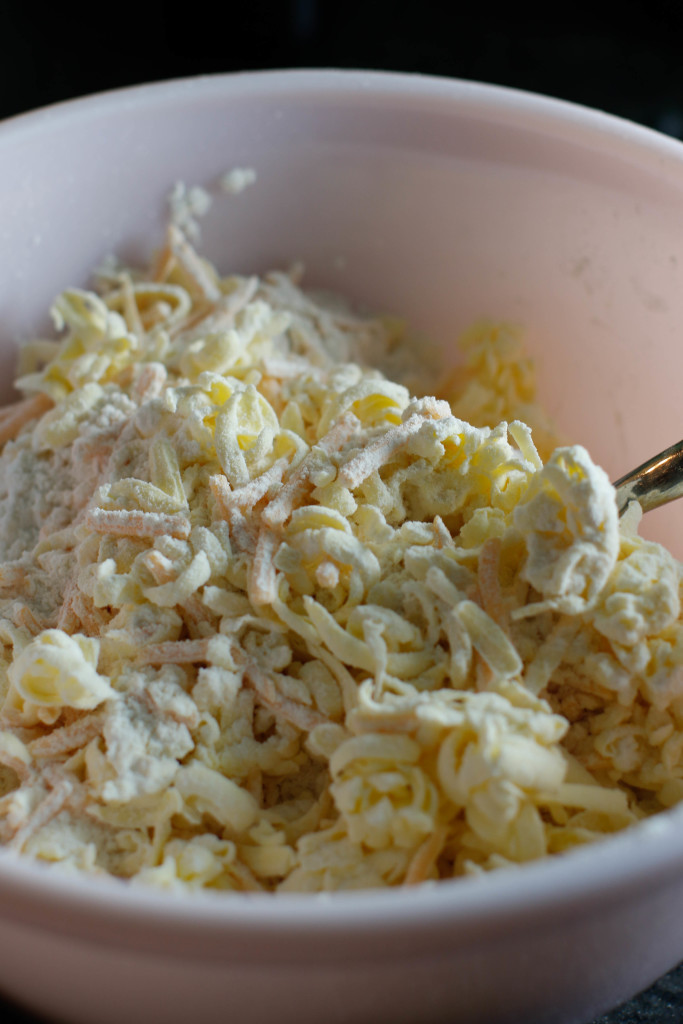 Here’s where you realize that because you haven’t gone to the store in ages, you don’t have any buttermilk on hand. But you do have sour cream and some half and half. Mix that together so you have a cup of liquid. It’ll work just fine. Pour it into your flour-butter-cheese mixture and, again with the fork, mix it up until it’s all incorporated, but don’t get crazy with the mixing. 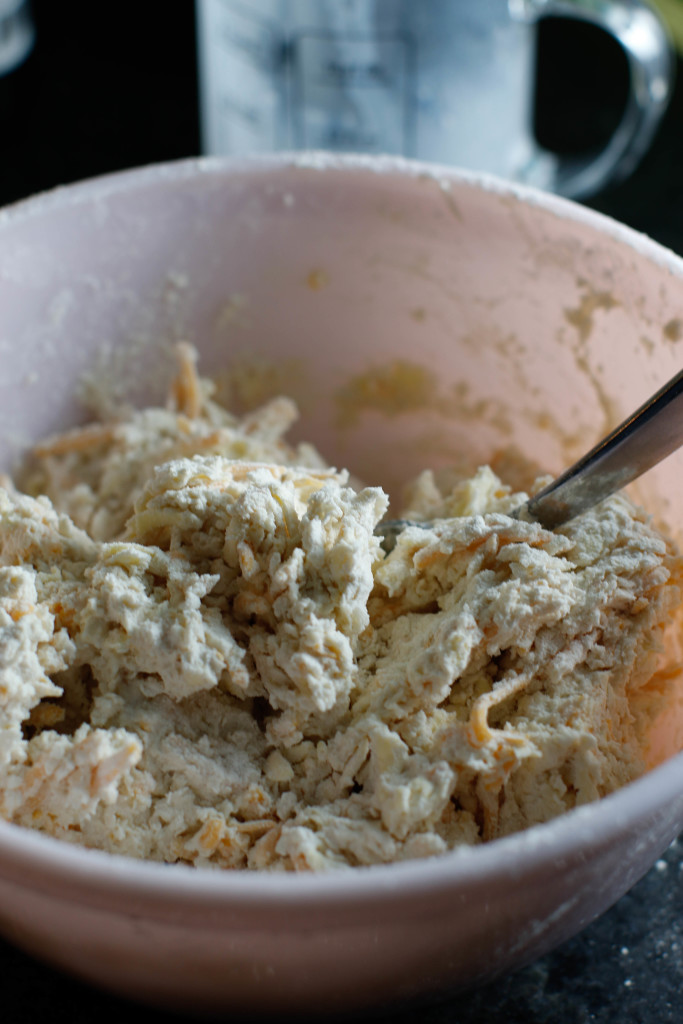 And then dump that mess onto your counter that you’ve sprinkled with a bunch of flour. 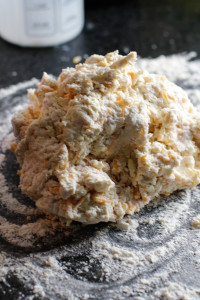 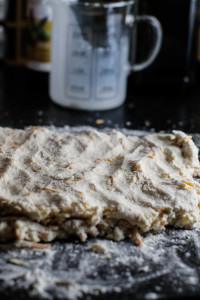 Once you’ve cut out all you can, pat out the scraps and keep at it until you can’t make any more biscuits. I used my big 3-inch cutter for these because I’m making sandwiches out of them, but for most purposes, 2-inch biscuits are just fine.

If you don’t have a biscuit cutter, use a round cookie cutter. Or a glass with a sharp edge. Don’t twist, just push straight down.

Once you’ve cut them out, put them on a plate and stick them back in the freezer while your oven heats up to 425 degrees and you clean up your mess. Because you made a huge mess and now there’s buttery flour stuck to your counter and you have to clean that up before it becomes paste. 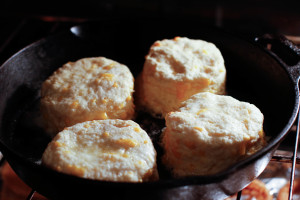 I like to bake my biscuits in a cast iron pan. Why? Because I like to cook nearly everything in a cast iron pan. You can bake your biscuits on whatever you want to bake them on, but cover the bottom of whatever you use with a bunch of melted butter. Trust me. Be liberal with the butter. I plop the pan on top of the stove, melt the butter, swirl it around, and then stick my biscuits in there before sticking them in the oven. That also heats the cast iron up a little, which is always wise. I’ll talk about why some other time. Brush the tops of your biscuits with some more melted butter or with some buttermilk, if you had some. To the right is what your biscuits will look like after they’ve been in the oven about 10 minutes. They’re not done.

You’re going to need to bake these suckers for nearly 20 minutes at 425. They’re huge, 3-inch biscuits. 2-inchers don’t take quite as long. Just take them out when they’re getting brown on the tops. 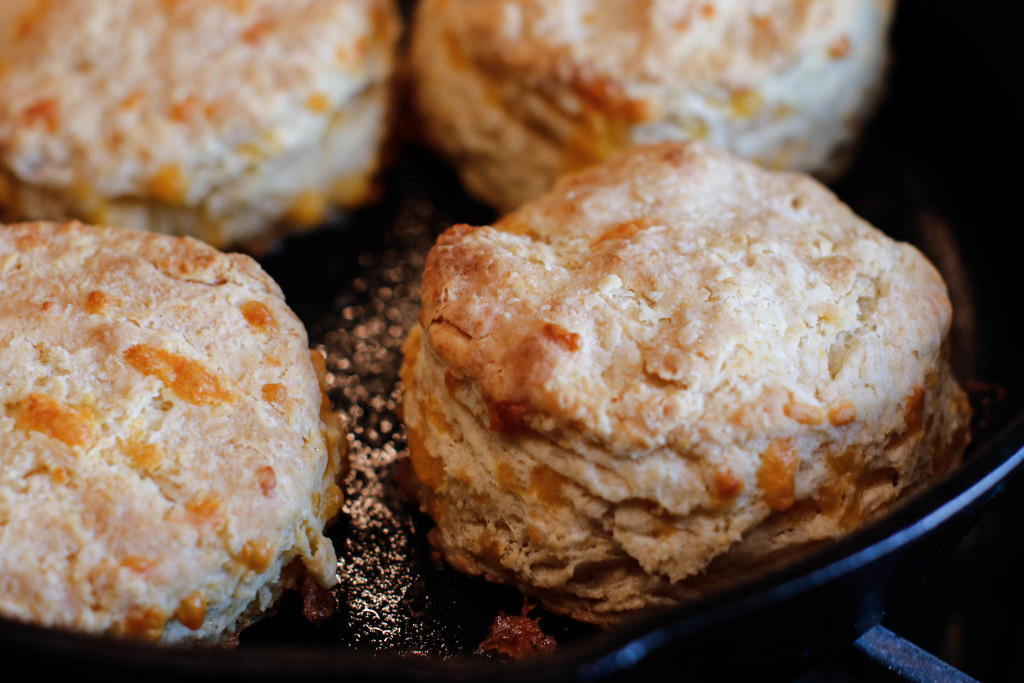 These are done. Look at all that flaky, layered, buttery cheesy goodness. Mmmm.

Now, you can stop right here like any normal person and slather these beauties with some of Laura Ann’s Jam’s Raspberry Habanero, or any of her jams, or you can use some inferior jam of your own choosing, or ladle on some good ole sausage gravy. Or you can make a Tennessee gas station chicken biscuit, like I did. Because I had a craving. 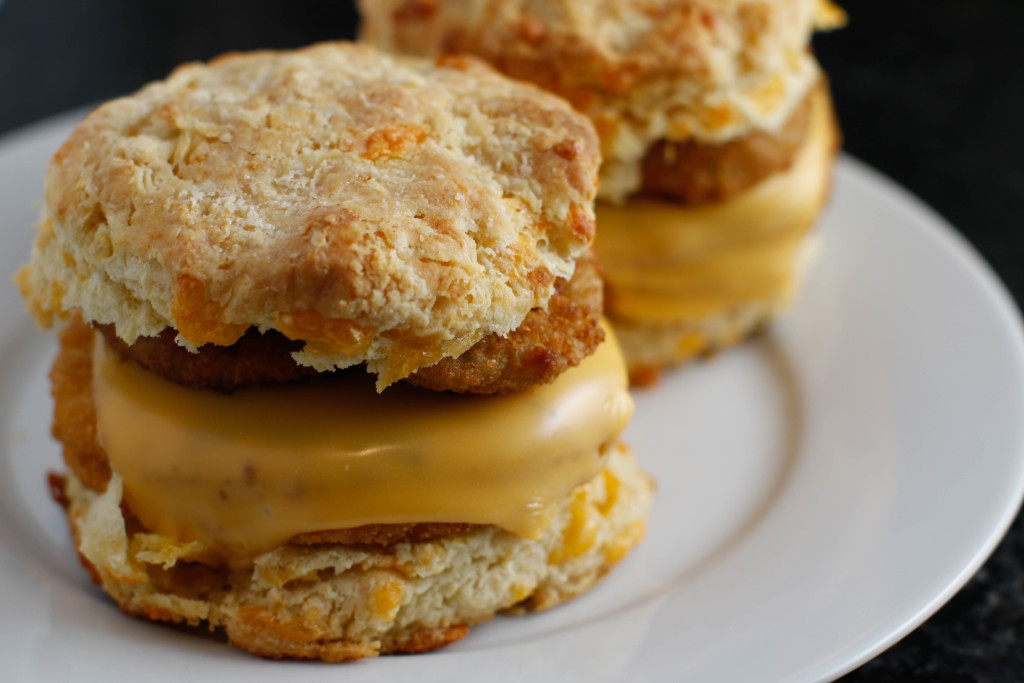 A few months ago, I was down near Chattanooga with some friends and we stopped in at a gas station for a chicken biscuit and I will tell you, there’s nothing better. Their’s did not have american cheese and an onion ring or two on top like mine do, but damn, they were good. They were good that first morning we had them, and then the second morning when I made my friend take me back for another one.

Now, I used chopped-and-formed chicken patties for these, but you can get fancy and make some fresh fried chicken strips if you like. And for god’s sake, use better cheese than American. But these were delicious. I can feel them hardening in my arteries right now.

Anyway, to make the biscuits:

You can also toss some dried herbs in there too if you want. That’s always tasty.

1 tsp baking powder (get the aluminum-free kind, otherwise your biscuits will taste like metal)

Grate the butter and stick it back in the freezer. Mix/sift together the dry ingredients and any herbs or grated cheese you’ve decided to throw in there. Add the butter and mix that up. Add the liquid, mix until just incorporated. Turn out onto floured surface. Don’t knead! Just pat it down, fold it over and pat it down again and do that a few times. Cut with a biscuit cutter, or cut squares with a knife. It doesn’t really matter.

Place on buttered baking sheet or cast iron pan. Brush the tops with buttermilk or butter. Bake for 15-20 minutes until as brown as you like.

I often make a double batch and freeze the cut biscuits flat in a gallon bag. You can pull them out and bake just one or a few at a time. It’s a time saver on a morning when you just want some biscuits and gravy and you barely have the energy to make the gravy, let alone the biscuits!