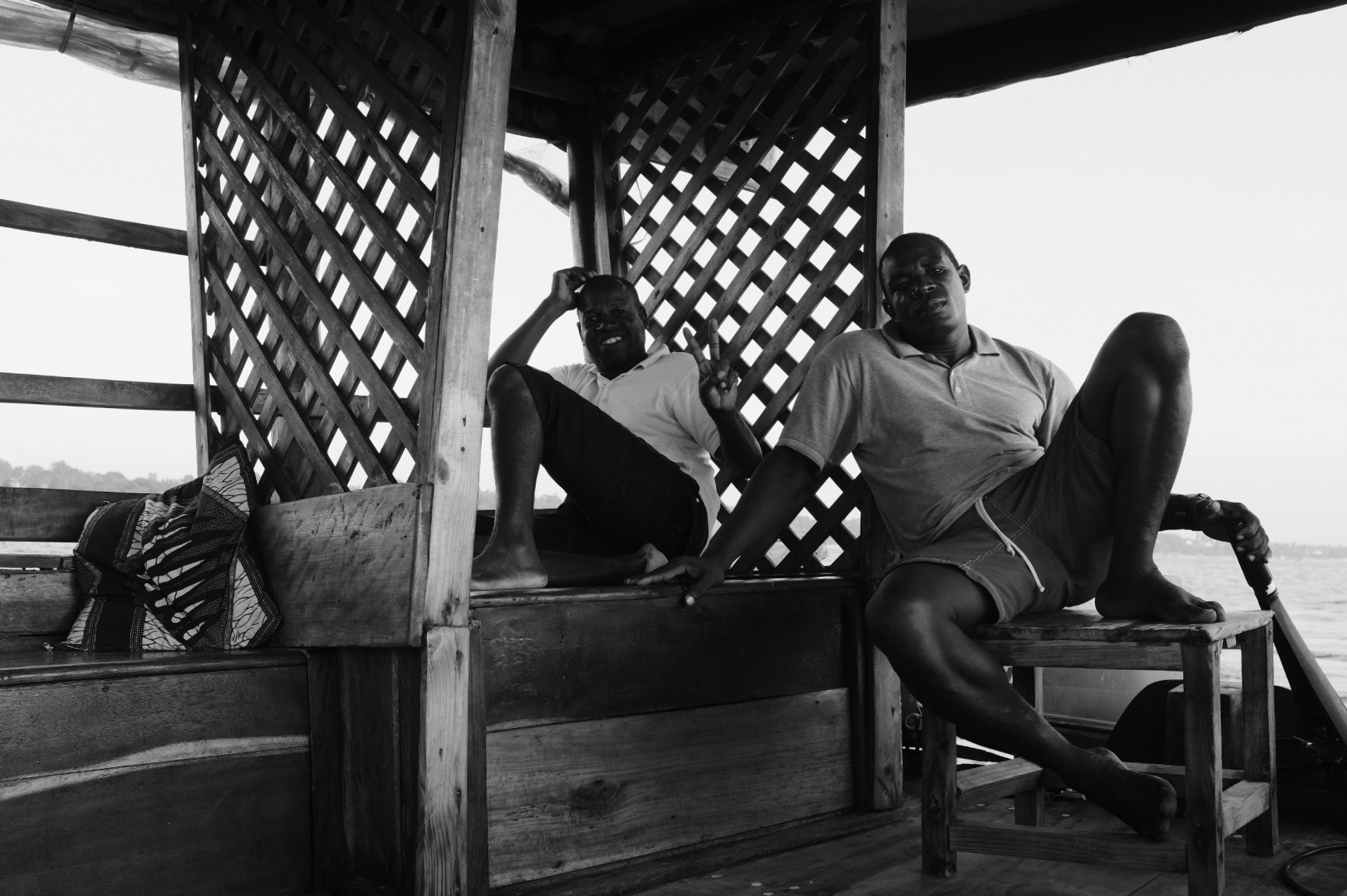 It seems absurd, after the adventure of safaris in Kenya, Uganda, and Tanzania, to say that my best day in Africa was the day I spent on a boat, but it’s true and that’s okay, because life is absurd sometimes.

It’s also absurd to think that this day featured my most favorite meal of the entire trip (and maybe of my life), but here we are. In Zanzibar. On the Indian Ocean, in a creaky wooden dhow, plunging into the salty sea after a five-minute education on how to snorkel.

But I’m getting ahead of myself, because we actually went on two dhow boat cruises. The first was the evening after we arrived, for sunset. We were exhausted, the seven of sixteen of us that remained until the end of this East African adventure. We’d been all over the place. Kenya, Tanzania, Uganda, and now back to Tanzania, to Zanzibar. We’d been up at the crack of dawn for safaris. We’d stayed up late into the nights drinking and talking and gazing at the African night skies. And we arrived in Zanzibar very late (or very early, depending on how you look at it), careened through the late-night streets of Zanzibar in a little bus, to the Zanzibar Serena hotel, somehow got checked into our rooms without killing anyone (that’s another story), passed out, spent the next day drinking by the pool, and towards evening, made our way down the street to meet up with our dhow boat for a sunset cruise.

I could give you a long history lesson about dhow boats, but wikipedia exists and will tell you more than I would. What I know from experience is that they are sturdy wooden sail boats that brought me to some glorious adventure.

Getting to our sunset cruise dhow boat involved a walk down the street from our hotel in Stone Town. We picked our way down some crumbly stone steps to the beach, kicked off our shoes, and waded in to the water to the boat. I’m not really sure how I got on it. I presume I climbed some kind of rope ladder and someone hauled me on board, but I had drunk many passionfruit daiquiris that day, so my memory is a bit hazy.

We were greeted by musicians and a lovely sundowner feast. Cheese and chips and roasted nuts and samosas. Just what we needed to keep us going for a couple more hours until dinner, especially since we’d spent the afternoon soaking in the Zanzibar sun with lots of sweet drinks full of rum.

If I remember correctly, the owner of the boat was either an American or a European woman who’d moved to Zanzibar for love, and she’d prepared all of the food for us herself. I’d be lying if I claimed I didn’t spend some time fantasizing about buying a dhow in Zanzibar and hiring a crew to run it for sunset cruises, and making all the food for the guests. Whoever this woman is, she did it well. It was a beautiful spread. Doing this myself is still in the “possibilities” column of my life goals list.

Something happened as we pulled away from the shore–I let go. I mean, I’m not particularly attached most of the time, but after so many days (was it weeks? It was a long time) of traveling and moving and adventures and life-changing experiences, I found myself breathing more deeply. We cruised past Stone Town and onto the wider sea to watch the sun go down, and I sipped my wine and just, I don’t know. I just was there. I was just in it, that moment in time. It helped that I was with a group of people, some of whom I’ve traveled with before, some of whom I’d just met on this trip, who are so easy. A good travel partner is a gift. A good GROUP of travel partners is a blessing from above. I’d go to the ends of the world with this bunch of yahoos. I love them all.

How can you not just relax when these are the guys guiding you over the ocean?

And then there was the second cruise.

We were up early-ish, had some breakfast, and then hopped on our bus for a drive across Zanzibar. We pulled off the road into what felt like total wilderness. If another vehicle had come our way, there would have been a tussle as to who was going to pull off into the trees or back all the way up. Once we got off the bus, we had to grab some water shoes and go for a hike across the beach and then into water that was a few inches deep at that time for a ways. Like, a quarter mile or more (we couldn’t return there, because later in the day, after the tide had come in, the path that we took was under several feet of seawater). Then we climbed into this boat full of supplies which drove us a little further to our dhow. (Again, rope ladder, climbing, being hoisted or pushed–somehow I made it on.)

Once on board, we cruised for a bit and made our way to a tidal island that would, in just a few hours, be completely covered by the sea. We got our brief snorkeling lesson and jumped into the water.

And now snorkeling is my new passion. I’d never done it outside of a pool. I don’t have any photos under the water, but I do have a lot of terrible video footage I took with my phone that was tucked into a waterproof pouch. And it was terrible because I’d just hit record and then swim. I was entranced. Everything fell away and it was just me and the ocean and the reef and the fish and I could have spent the entire day out there. I didn’t want to stop. We moved a few times, and my shit-pot knees stopped bugging me about clamoring up and down a rope ladder because even my shit-pot knees wanted to be under the sea. I was like a little kid. More. More. More.

And then we stopped for our shore lunch.

The tides being what they are, when we stopped, we had to hop out of the boat and wade in to the island from waist-deep water. But once we tore ourselves away from the sea, we were greeted with a cooler full of cold drinks. I fancy this Kilimanjaro beer.

A whole crew of folks had preceded us there and had started cooking us up a feast. At this point, we were worn out. We’d been swimming and snorkeling for hours. We’re damp and there’s sand all over our feet and wedged up in places sand should not be and not one of us gave a flying fuck about any of that. The outside world was gone and it was just this little sandy island and us and cold beers and wine.

When they called us to fill up our plates (ON CHINA! They hauled china and glassware to the shore lunch island what the hell!), I was overwhelmed. I grabbed a grilled lobster (OMG), a chicken leg, some rice because they had these sauces for the rice that good christ what was even happening and they also made some garlic bread because they knew Americans like their garlic bread. This was butter with bread. It was that garlic bread that when you bite into it is an explosion of garlic-y buttery goodness and the crisp bite of toasty bread. But my favorite thing was that polenta cake right up there in the front of that picture above. I went back for a couple more. In East Africa, Ugali is served in many ways, with many dishes, but our cooks sliced it and grilled it into crispy little cakes and I could live on them. My next BBQ will absolutely feature these little cakes. Ugali is my jam. And I bet grilled or fried Ugali cakes would taste really good with jam. Just sayin’.

Once we’d stuffed ourselves silly, our guide started hauling out dessert. First up was jackfruit. He basically yanked these things out and started chopping them up into bite-sized pieces with that same knife they used to wack open the coconuts earlier in the day.

You can basically call your average espresso decaf after you’ve had this coffee. Strong-as-hell coffee ground to powder, spooned into the little cups, and boiling water is poured in from a kettle (like Turkish coffee if you’ve had it).. It sits for a moment, and then she pours Amarula into each cup. (Do you like Bailey’s? You will swoon over Amarula. I bought a bottle at the duty-free on the way home at the Amsterdam airport, only to find that it’s available at my local liquor store, thank god.)

I’ve had some damn fine meals in my life. This one nearly made me cry. I might have cried. I probably cried. I was a little drunk by this point. You can shine me up, dress me in finery, take me to the finest restaurant helmed by the most adventurous and decorated chef and there’s no way it could compare to this experience. Maybe if you took me snorkeling in the Indian Ocean first. I don’t know. This was once-in-a-lifetime. Shared with wonderful people in a stunning place.

This was my very best day in Africa, out of so many best days. I’m still stunned that I had the privilege to visit such a beautiful continent. And I only scratched the surface.

dhow-boatindian-oceanshore-lunchsnorkelingsunset-cruise
By Viki Gonia, May 1, 2019