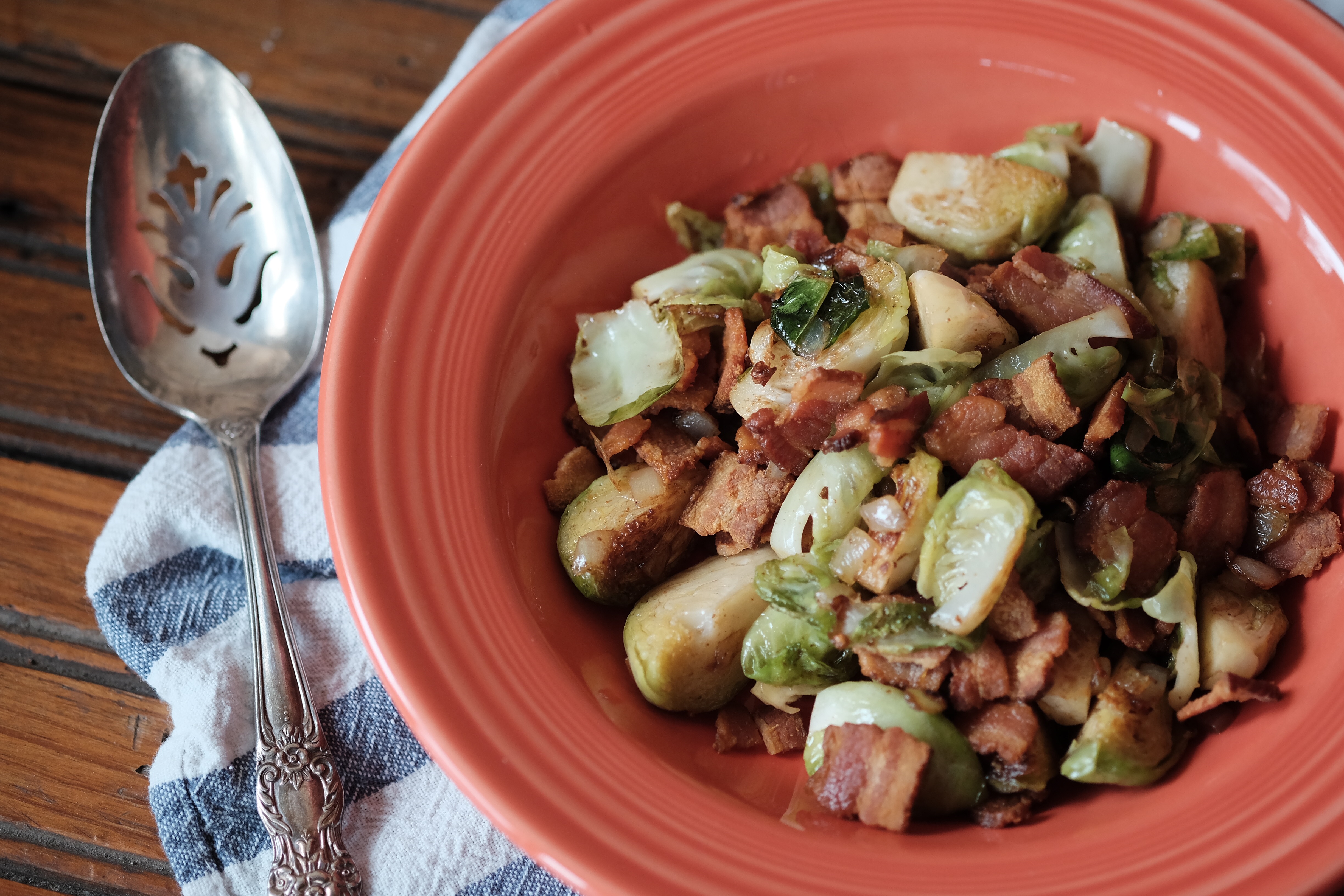 Brussels sprouts are the new comeback kid, amiright? Back in the day, brussels sprouts were the thing everyone claimed to hate. Nobody liked brussels sprouts. They were the thing sitting on your plate, uneaten, that meant you had to sit at the dinner table long after everyone else had gone to bed because you refused to eat them. You probably hated them because by the time you gave in, they were cold and disgusting. That’s my theory anyway. If you’d just eaten them when they were hot!

That’s probably not true, because they were always this kind of steamed little ball of mush. Nobody knew how to cook brussels sprouts.

Now it seems you can’t go out to a restaurant without seeing brussels sprouts on the menu. This is not a bad thing. Often, brussels sprouts are cooked up with bacon. Because, as we all know, bacon makes everything better. I love me some bacon. 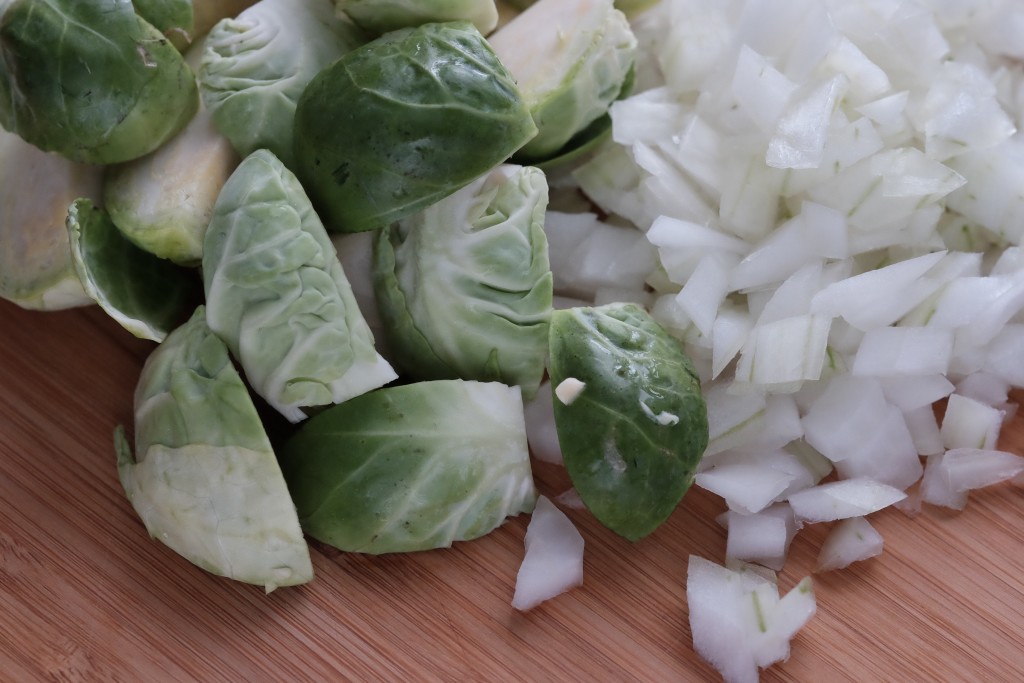 I usually go for the petite little brussels sprouts. No particular reason. I have no idea if they taste any different than the big ones. But this last trip to the store, they all seemed to be on the giant side. I quartered them, after peeling off the outer leaves and giving them a good rinse and a little scrub. They were kinda dirty.

For this dish, you can use however much of all of the ingredients that you want. If you really, really love bacon, use a lot of it. Same goes for the onions. Generally, I’d say about 4-5 pieces of good, thick bacon to a pound of brussels sprouts, and maybe a small-to-medium onion.

When it comes to using bits of bacon in a dish, I usually like to cut it into pieces before cooking. The truth is, you will probably get a more even crispness on your bacon if you cook it in strips, let it cool a little, and then chop it up. But I don’t do it that way. I think the bacon cooks faster if it’s cut into smaller pieces. I have no scientific basis for this belief. Just a LOT of bacon cooking experience. You can go ahead and do it however you’d like. If you do cut it before cooking, be prepared for when it’s done, because you’re going to have to scoop those chunks out of that hot pan pretty quick.

Use some nice thick-cut bacon. Those namby-pamby paper-thin strips of your average bacon aren’t going to hold up to the brussels sprouts. I don’t know why anyone even bothers with thin bacon anyway. And though I’m a bit of a bacon snob and I’m usually telling people that they should splurge on good bacon, today I used some store-brand bacon. It was on sale. If someone comes up with an app to figure out what phrases a person has said the most in their life, we’ll find that “It was on sale” is my number one by a huge margin. (See also: Viki’s shoe closet.)

It was on sale, and it was mostly fat. That’s some chubby bacon right there. 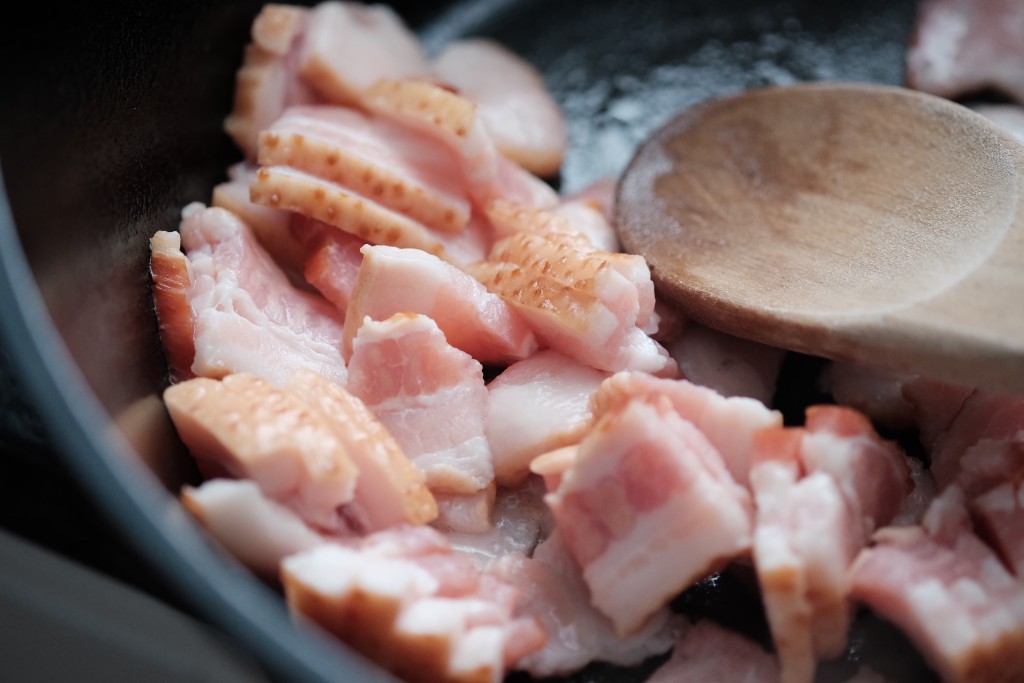 Last year, I took a long weekend down in Tennessee, staying in one of the gazillion rental cabins near Gatlinburg with a gaggle of friends. It was a blast, except for the Gatlinburg part. Lord, I have never seen a main thoroughfare more crowded with cars. We did go to Dollywood, so I can cross that one off the bucket list. And we spent far too much time in one of those Lodge factory stores. Oh my, the Lodge. I just love cast iron. I used my deep skillet to make these brussels sprouts, only because it doesn’t get used enough. Any old fry pan will do.

You want to cook up your bacon until it’s crisp, and drain it on some paper towels. If you cooked full pieces, chop them up once they’re cool enough to handle.

Don’t get rid of that bacon grease, though! You need it for the sprouts. I had a little too much left after the bacon cooked because my bacon was so fatty, so I poured a little off. Just use your best judgement.

And then add a couple tablespoons of butter.

I hope you weren’t under the assumption that this was a healthy side dish just because its main superstar is brussels sprouts. This is definitely less of a case of making bacon seem more healthy and more a case of ruining the nutritional value of brussels sprouts. Whatever. They’re still green. 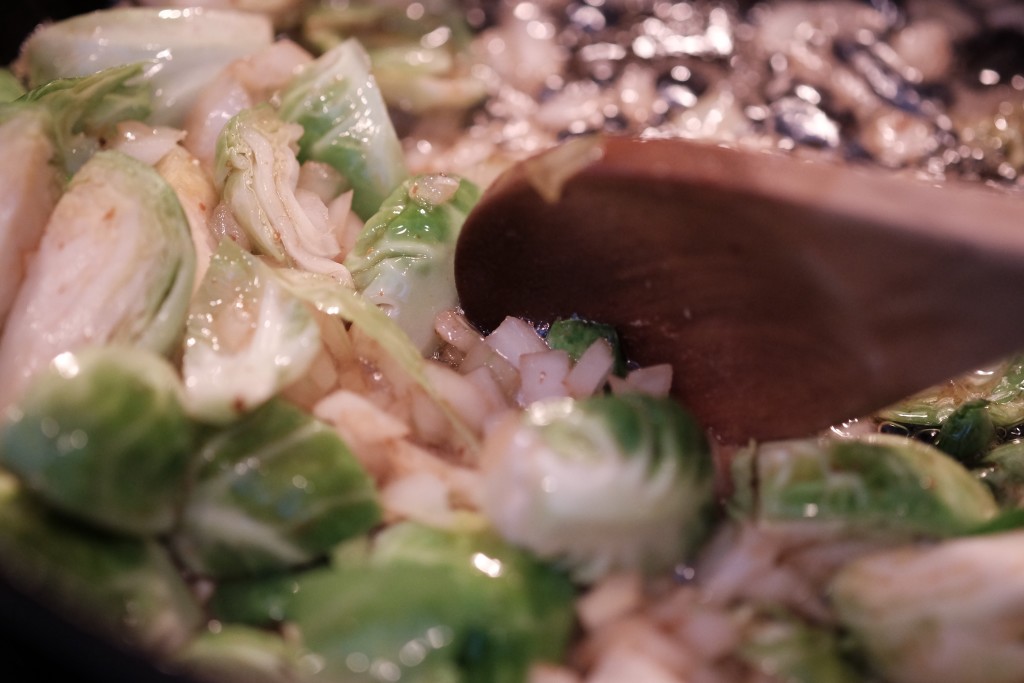 Toss a couple tablespoons of butter into your hot pan full of bacon grease. It’s going to go brown almost immediately. That’s okay. FLAVOR. Dump in your chopped-up sprouts and onions and stir occasionally. You’re looking for the sprouts to brown up, so you want to give them some contact time with the pan. Plus, if you stir too much, the sprouts will fall apart. Which isn’t necessarily a bad thing. Get some fresh-ground pepper in there too. Normally, I’d say salt, but this time around, there’s no need. Because bacon. 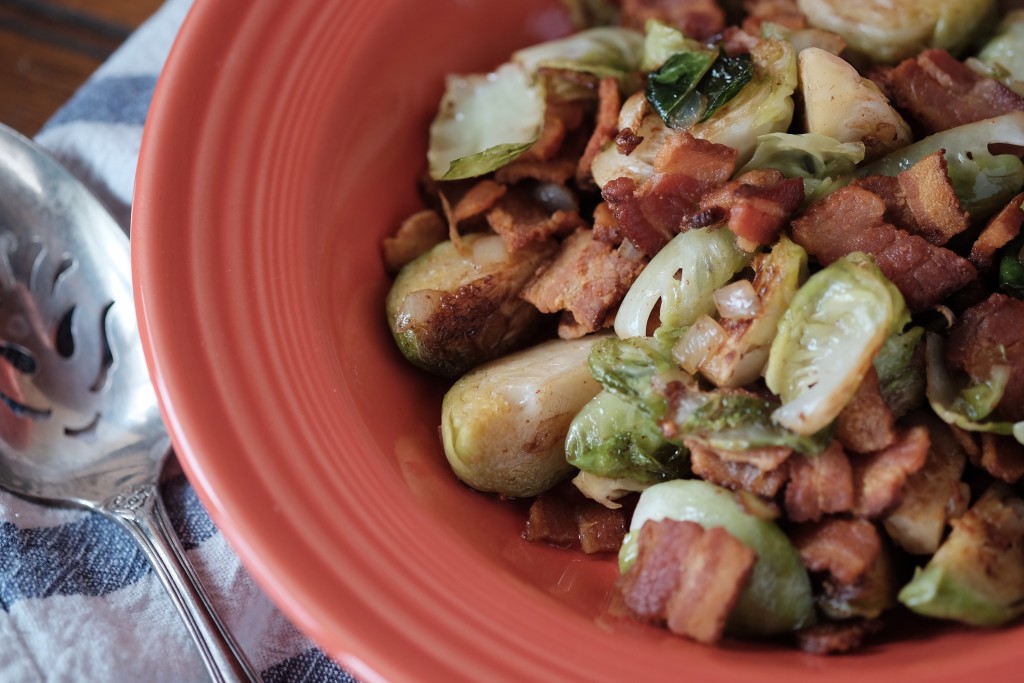 Side dish? Meh. Make it the main dish.

I almost ate half of this before I had a chance to get the photo. Give it a taste, and if somehow it manages to still need salt, sprinkle a little on. But I doubt that will be the case, unless you don’t use a lot of bacon.

You could make this a main dish and serve it with a green salad. Especially if you go crazy with the bacon. If you’re planning it for a side, I’d be a little more conservative with that bacon. It’s really there to impart some flavor, and you don’t want the richness overpowering whatever else you’re serving.

This is a great side to serve with pork or lamb chops.